Today’s scene comes from Hunted Down, Part Five of the Uncommon Animals series: 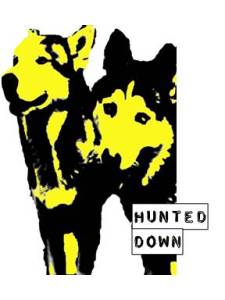 “Hey man, get up. Let’s go for a run.” Rick’s boisterous voice bounced around Matty’s bedroom. The white cinder block walls silenced the outside world, but anything inside them was magnified.

Matty rolled over and buried his face in his thin pillow. It might have been immature, but he couldn’t stop. His chest burned and his eyes watered.

“I know you’re awake.” Rick laughed and kicked the mattress. “Get up.”

Matty said nothing and kept his eyes shut. His attempt at ignoring his Speaker ended when Rick tipped up the mattress and sent Matty rolling across the thickly carpeted floor.

“You dressed already? Or still dressed?” The disapproval in Rick’s voice was too much.

“What the hell do you care? We haven’t hung out in like a week. Why don’t you go run with Sonja?” The only worse than the whine in his voice was that he meant every word.

“I’m sorry.” The genuine remorse in Rick’s voice only added to Matty’s guilt. “I got wrapped up in her, I know. So let’s go now. Just you and me. Get a shower and we’ll head out. If you make it all three miles, we’ll pick up some new video games.”

Rick’s gray eyes popped. “I didn’t mean it like that. It’s just that I finally save-”

“Whatever.” Matty grabbed his mattress and shoved it roughly on his bed before throwing himself back on it. He curled up in the soft blankets, not caring if his sneakers got them dirty.

The click of the door was the only sign Rick left. Once he did, Matty’s chest and throat closed, but no tears fell. Instead he was awash in numb rejection.

He wasn’t sure how long he lay there, feeling everything and nothing, before a weight on the edge of his bed announced Mina.

“I’d ask if you wanted to talk, but you’ll only ignore me or say no. You need to get out of bed, take a shower, and start training again. Rick said you slept in your clothes. You haven’t done that in years.”

“How would you know? You took off and left me in Chicago.”

There was a long pause. When she finally answered, there was no heat at all in her voice. “Is that what’s bothering you? Are you afraid of being alone again?”

Of course she understood. Nobody knew him like his sister. “Sorry, I’m not like you and Rick. I don’t get to move on with my life and screw hot demon hunters.”

“That’s not fair, Matty. Do you want us to be single forever?”

Tears finally came in a silent stream. Of course he didn’t want that for them. “Don’t call me Matty. I’m only a year younger than you, I’m not a child.”

“I didn’t mean that.” Regret was thick in her voice.

He sat up. “Yes, you did. But hey, sorry fighting not to be a slave left me with a few issues. Guess I should have been like you and just accepted it, right?”

Her face, so like his own, was a picture of worry and her lips trembled. “That’s not fair, either.”

“No, what’s not fair is that I did all the suffering, but you got the benefits. You aren’t afraid of people or going outside by yourself. You don’t wake up screaming at night, five years later. You get to date people and have a job. I get a checklist of chores and a pat on the head if I manage to finish them without being told.” He stood and stormed out his basement.

The kitchen didn’t help his temper. Rick sat at the round table, worry plain on his face. Sonja stood behind him rubbing his neck, her long black braid dangling down her back. The hell of the whole thing was that Matty liked the demon hunter. And Rick certainly deserved to be happy.

Seeing them together was a knife in Matty’s gut, worse than his sister and the Trojan. However nice, helpful, and frankly cool Sonja was, Matty hated seeing her with Rick.

The more he saw them together the more certain Matty became that he’d always be alone. At some point his sister and Rick were going to want to move on with their lives. Sam might let him stay, but he was closer to sixty than fifty.

Who would take care of him after that? What options were there for a werewolf with brain damage?

Rage flashed through him at the warning tone in his sister’s voice. “Mina, can you please shut the hell up already? We’re all tired of you and your goddamn attitude. The Trojan left. Get over it already. And yeah, I’m still fucked in the head. I’m always going to be fucked in the head. Didn’t you get the memo when you moved in?”

She stood frozen on the stairs, shock in her eyes. The shame that bubbled in his stomach only fed his fury. She had been his protector and his sanity, and he never doubted for a moment that he was her whole world.

“I-I’m-” She blinked rapidly and swallowed.

“Just leave me the hell alone for once.”

“Please what? Stop finally speaking my mind? Aren’t I supposed to be learning to be independent? Well, here I go. Out the door.”

Matty rushed towards the porch, one hand checking for his cell phone. It was in his pocket as always. Matty was both relieved and disappointed. The cell phone would have been the perfect excuse not leave the house. “And don’t call me ‘Matty!’ I’m not a damn child!” He slammed the door and his voice dropped to a murmur. “I’m only a year younger than you…”

After a block, the rage faded to a manic depression. The lethargy that had plagued him the last two days was replaced with a shaky energy that demanded release.

Matty lost track of how long he walked. Brighton Heights was a small neighborhood full of block after block of gorgeous old homes. The brick houses with their tall columns along long porches, wide windows, and well manicured lawns were welcome sight from the run down version Matty worked on every day.

As warm morning moved to hot afternoon, Matty got his first taste of summer in a city with three rivers.

A bug landed on his neck. Matty swatted at it and debated turning back. He’d have to face them all eventually. The thought of how overly nice everybody would be about the whole thing depressed him even more.

Maybe I should keep-