So I disappeared for week.

See at the funeral, I had a bit of a revelation. All these people talked about how kind my father was, and how quiet he was. How willing to help every person and thing he saw.

And, yes, my father was those things. But as he was a private person, the man the world saw was not the whole picture.

In fact, I couldn’t speak at the church, because all my favorite  stories about my father are rather inappropriate, and being the man he was, he wouldn’t want them spread about.

My father was tough and sweet, quiet and brash, and strong, despite his rather thin frame.  He taught me to shoot and to swear, and to always help other people. He remained as willing to save an animal as a child until the day he died. And I married a man who is his physical  opposite but his mental and emotional brother. Even if my husband lacks my dad’s green thumb.

My only solace is that the pain has ended for him.

I miss you, Daddy. 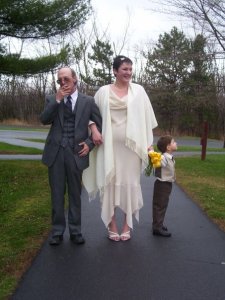 And because I am my father’s daughter, it’s back to work.