Starting to clean up Monsters of Pittsburgh: Werewolves for publication. In honor of that I thought I’d show the opening.

The slight shuffling of Maureen’s broken foot rolled Daisy Quinn off the cot and onto the cement floor before she woke up.

“Twitchy, aren’t you?” Small, white teeth gleamed above Daisy. Maureen smiled too much.

When I get paired up with a killer like you? Always.

Daisy didn’t say it. She didn’t like talking to Maureen. The pale skinned woman wore her sins with pride. “Where have you been?”

Maureen shrugged and pulled a knife off of her belt. “Checking up on the Grekovs.”

Bile and fear turned Daisey’s stomach. “Are you trying to get us killed?”

The blade glinted as Maureen tossed and caught it. “Matty hasn’t left the house in days, and Mina’s almost as reclusive at this point.”

“You have no idea what you’re talking about.” Daisey opened the footlocker at the bottom on her cot and pulled out a bottle of water. “Wilhelmina and Mateo Grekov are not typical werewolves. They need to be worn down. In your condition, they’d tear you apart.”

Maureen’s laugh slipped through her very white teeth, and the sound echoed through the warehouse, bouncing off the empty cots and rolling over the few personal possessions people had brought with them. “I think I’ve worn them down quite nicely.”

Rage replaced fear. “You’ve done nothing, but cause trouble.”

The knife paused, blade pointed at her, as Maureen’s dark eyes stared. “Excuse me?”

“You brought Giorgios and his bitch on your heels. They’ll be trouble, especially now that we’ve revealed ourselves.”

Maureen sneered. “Ask Danial about that.”

Daisy ignored the dig about her cousin. “After we released the talasam, you had to go spy on that hedge doctor, and set off that alarm.”

“Not just a doctor, but a hedge doctor. You spooked her and she hurried back to the house. Ten minutes later, Mateo woke up. Do you know how few people survive a talasam?”

“Yes, but Mateo Grekov is alive.”

“If I hadn’t sent the witch back, you wouldn’t have found out that Mateo and Dean Stanton were dating.”

“That wouldn’t have mattered because Mateo would be dead! Do you not understand this? He an expert at tracking. We don’t want him looking for us. He’s also Wilhelmina’s one weakness. She falls apart if he catches a cold and I would have killed him if you could have contained yourself for a few more hours.”

Maureen smiled. “You’re the one who couldn’t kill Dean Stanton.”

Daisy’s hand itched to slap the woman. Maureen was sloppy. Nicknames, setting off security alarms. And if she had just looked up, Giorgios wouldn’t have broken her foot. “If you hadn’t sent the hedge doctor back to Mateo, we wouldn’t have needed to attack Stanton or Wilhelmina’s boss.”

Maureen’s laugh twinkled as the knife flashed through the air again. “Is that why you’re mad at me? I killed Jennelle and took Rita out of commission, while you failed to kill one private investigator.”

“Any fool can kill, Maureen.”

Daisy’s hands shook. “I can kill if I have to. I have before and I will again until we cleanse this sickness. Never forget who questioned Pieter de Wit.”

Maureen’s smug smile slipped. Pieter had been hard to break. It had taken days to get him talking.

Daisy lifted her chin and glared at the suddenly nervous mercenary. “I accept my sin, Maureen.”

“It’s a sin, Maureen. I had to beg to fight abomination with abomination. I’ve accepted that I will fall from grace, as have the others.”

“And what? All of you get reincarnated as rocks?”

“Even a blasphemer like you knows that reincarnation doesn’t work like that. Not that it matters. We’re to be embalmed and buried in concrete so that our remains don’t taint the earth.”

Maureen took a swift step back, and her dark hair swirled around her face. “You’re a special kind of crazy, aren’t you?”

“I am a warrior of truth, and the truth is, you have done nothing but get in my way since you came here.”

“Six weeks ago, at that nightclub, I was making progress with Wilson.”

“You talked to him for five seconds.” She waved a dismissive hand.

Heat flashed down Daisy’s spine. “I left because you had to hang around Wilhelmina flashing that knife.”

The woman’s pale face glowed red. “She didn’t see me.”

“She would have. She’s the deadliest werewolf I’ve ever heard of. But your interference lost Wilson’s chance at redemption too.”

“What the hell are you talking about?”

“Instead of talking him away from the Grekovs like I planned, he’s sleeping with Wilhelmina. There’s no redeeming him.”

“The man left the Tribes before he ever met her. I doubt you were going to convince him to go back.”

“You always have an excuse for your incompetence, just like your sins.”

Maureen sheathed her knife with a jerk. “You and this sin… you can’t really believe in that crap.” She waved a lofty hand.

Daisy grabbed it and twisted, forcing Maureen up on her toes to avoid dislocating her shoulder.

“Listen to me, you murderous bitch. Nature gave humans the ability to control werewolves. And they have to be controlled. They are unnatural. The change from human form to an animal… it doesn’t exist anywhere else. There are no werepanthers or werecockatoos. Just the wolves. Their presence taints the human body they inhabit and only the power of the Voice keeps them under control. This obsession with setting them free will pollute the earth itself, as well as harm innocent humans.”

“You’re going to break my arm.” There was an unfamiliar whimper in Maureen’s voice as she fought to keep her weight off her injured foot.

The pale skin of Maureen’s arm was blue under Daisy’s fingers and her shoulder had stretched nearly out of it’s socket. Sweat had collected on her upper lip and her temples were damp.

“I should, just to give you a matching set of limbs.” Daisy held on for a moment longer before releasing her. “If you screw up one more time. I will feed you to Wilhelmina. You may not believe in the charge nature has given, but you work for us.”

Maureen rubbed at her shoulder as she plopped on a cot. “So what’s the plan?” 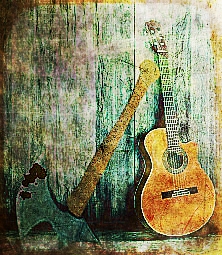