Why did I have to check my watch? Because I’m still not sure which century I’m in. Hell, most days, I think reality should come with an asterisk.

Today’s topic, feminism, and why I might be giving up on the human race.

I’m a feminist. I make no bones about it.

I don’t hate men, I just think that women are the equal to men, and that means across the board. I genuinely believe that men and women have the same emotional and mental capacity. I think that differences between men and women are no greater (and no less) than the difference between any two random people.

This is reflected in my writing. And Mina is just as much as feminist hero as Rick or Jeff. My men do not condescend to women, nor do they put them on pedestals. They react to people. They like or dislike people.

Rick does protect a woman in Succubus, but she needs protecting. Rick also protects anyone who needs it, from helping Matty through a panic attack to covering Sam when he gets injured in a fight. Conversely, he has no bones about fighting women. He goes all out in a fight with Maureen in Humans.

Jeff? My non-action guy. Not a fighter: a healer, a doctor. Why? Because guys built like Rick, who kick much ass, aren’t the only kinds of heroes.

Do I have female, non-actiony characters? Oddly enough, I do.  Kelsey, Courtney and their mother, Rose, never fight. Rita and Jen use guns to defend themselves because they can’t fight.

Why am I bringing this up? Because yesterday, I assaulted from many sides with the idea of not only what a woman was, but what they are supposed to be, especially in fiction.

A clarion call went out asking for fantasy with a female protagonist who wasn’t “a guy with boobs.”

My immediate response: Give me an example of that character.

And lo, let us behold the massive hyper-masculinity of Xena: 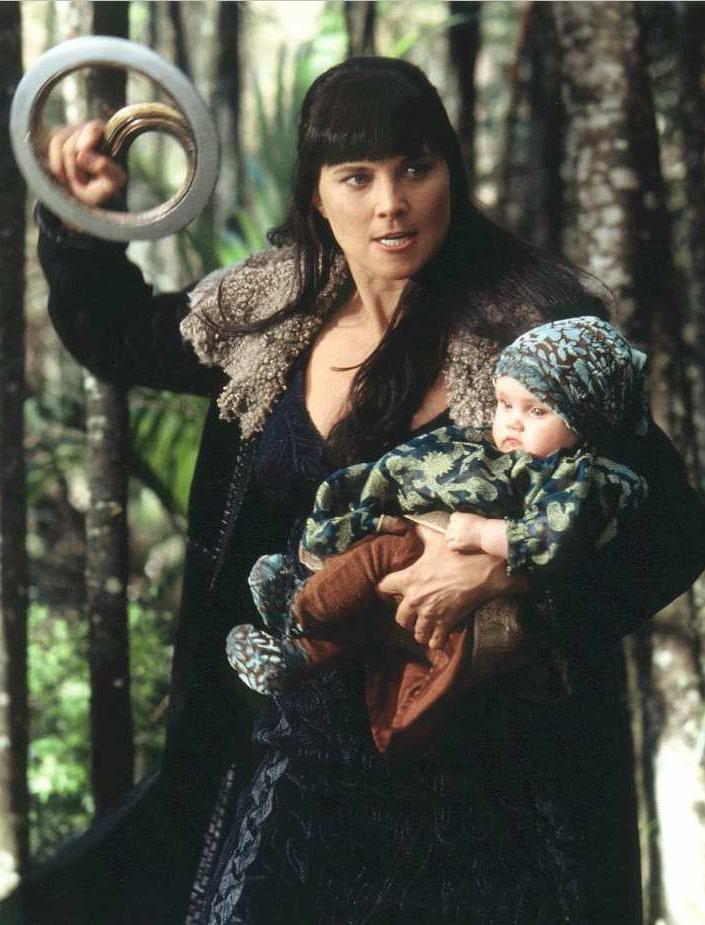 Yes, the show about a woman, who regrets her past, and runs around with her best female friend defending people… where in she wears skirts, accentuates her bust, has a child, and most episodes deal with her feelings. This show was held up as the example of a woman who is essentially ‘male’.

I wish I was joking.

I know what some of you are thinking, ‘But she’s soooooo aggressive.’

Some women are aggressive. Some are passive.

Some men are aggressive, some are passive.

We accept all kinds of aggression in women.

Let someone assault or insult her child…

Or what about how women are portrayed while shopping?

These are socially-accepted mega-aggression from women. But people will tell you that, across the board, aggression isn’t a female trait.

Women can be bullies, women can be abusers. There is no emotion or trait that any one group of people has a monopoly on.

Then I got in a discussion about female armor in video games. Why does skimpy female armor upset me? Because there isn’t nearly enough skimpy male armor out there.

And of course, the topper was being told that equality is unattainable and my standards are too high.

So after a lot of frustration, I went to bed.

I awoke to passive-aggressive message from a ‘real’ woman, detailing her life as a stay-at-home mom. It ended with her asking me if she was a strong enough woman for me.

I’m a stay-at-mom, by choice. I cook dinner every night, from scratch, for five people. I clean up after my husband and kids (though the kids do have lots of chores.). I decorate for holidays, I paint rooms and pick out color schemes.

I prefer to wear skirts, paint my nails, love jewelry, and fret over my hairdresser.

I would have responded, but that ‘real’ woman blocked me.

Feminism isn’t about hating men or forcing women out of dresses. It’s about being able to choose your own path. It’s about equality.

Why does it focus on women? Because women do not have societal equality. And before some meninist tries to say that there are times society favors women over men, those instances almost universally exist where society is trying to enforce some sexist nonsense. Why do courts favor mothers over fathers in custody battles? Because women are ‘better parents’. Why don’t people take female on male domestic violence seriously? Because women can’t hurt men. Both claims? Utter crap.

They tell us to write the stories that we want to read. So I did. I wrote about people. Some are men, some are women. They come in all different colors, sizes, sexual orientations, have a wide array of personalities, and weaknesses.

That may not be everyone’s cup of tea, but it is feminist writing. It’s not about women fighting, it’s about men and women on equal footing.

Nobody holds Mina back from a fight, and nobody makes fun of Jeff for not fighting.

And maybe this is what I get for actually talking about real equality and feminism. Maybe I should just keep my mouth shut. It’s not like this is a new concept, or I’m talking about something radically different from what people have said before.

But it is 2015, and I really thought that, by now, some of this would have trickled into the public consciousness.  I really didn’t think that I’d still be having these discussions with people when I was in my thirties.

Yes, I know that reality isn’t fair. I didn’t realize that I was supposed to shut up and accept it.